Since aircraft first began to fly and carry passengers for hire, there has been the potential for the failure of critical assets.

Furthermore, with the increased integration of numerous complex systems to safely and efficiently handle the vast number of airplanes and passengers, along with the economic and environmental constraints placed on the aviation system today, the potential for significant ripple effects from a single failure has never been greater. It has been through this long-term push for greater system efficiency that key elements of resilience have been lost or overlooked when planning for or maintaining critical operating infrastructure. Recent trends indicate that airlines, passengers, and politicians are also demanding that airports become increasingly resilient and that the integrity of the National Airspace System (NAS) no longer be vulnerable to disruptive events that occur at a single airport.

Operational issues at a single airport can impact the entire NAS and can have ripple effects worldwide. Nothing better illustrates this point than the catastrophic failure of the electrical system at the Hartsfield-Jackson Atlanta International Airport (ATL) in 2017, which shut down the airport for several hours, crippled operations, and resulted in tenant airlines losing upwards of $50M in revenue. Critically, the effects of the power outage reverberated across the NAS, resulting in the immediate re-routing of hundreds of arrivals and the cancellation of thousands of domestic and international flights over the course of the following week. ATL isn’t alone—high-profile operational disruptions have recently occurred at a number of airports across the country, including Los Angeles International Airport, McCarran International Airport, and John F. Kennedy International Airport.

Resilience is the ability to resist, absorb, and recover from or successfully adapt to adversity or a change in conditions, while still retaining the same controls on function and structure. 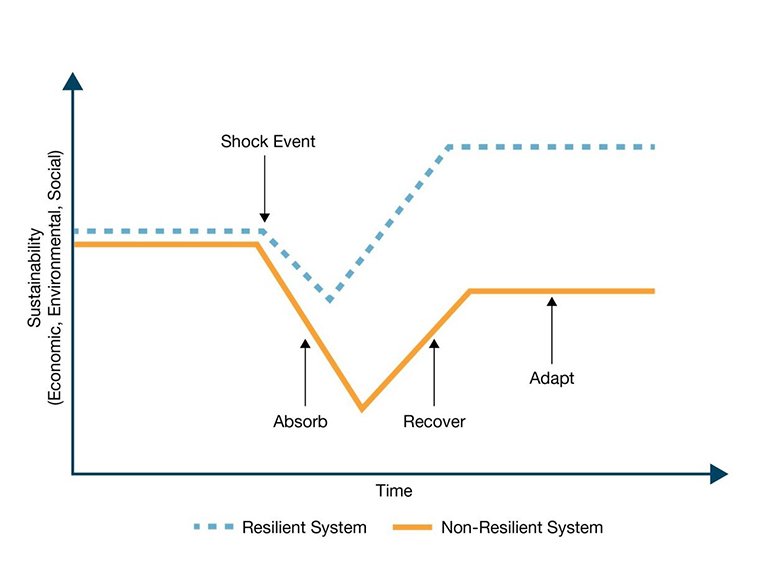 An organization achieves resilience by recognizing threats and hazards and making the necessary adjustments that introduce or improve future protection efforts and risk reduction measures. Resilience to an adverse event occurs in three phases, as shown below:

Current resilience-related topics usually focus on the impacts of climate change—such as sea-level rise, increased storm surge, and extreme weather events—and typically involve physical infrastructure. However, an organization’s ability to resist, absorb, and adapt fundamentally hinges not just on building things, but also on its business and planning processes. For example, constructing barriers to combat sea-level rise at a coastal airport is a component of resilience, but it may not be the only resilience-based hurdle the airport faces. The airport may have internal planning and management process or workforce issues that prevent the construction or maintenance of the barriers in a timely and cost-effective manner. Accordingly, resilience should be viewed as having four qualities, or “dimensions,” which include:

The three phases and four dimensions of resilience should be ever-present considerations throughout the planning process. 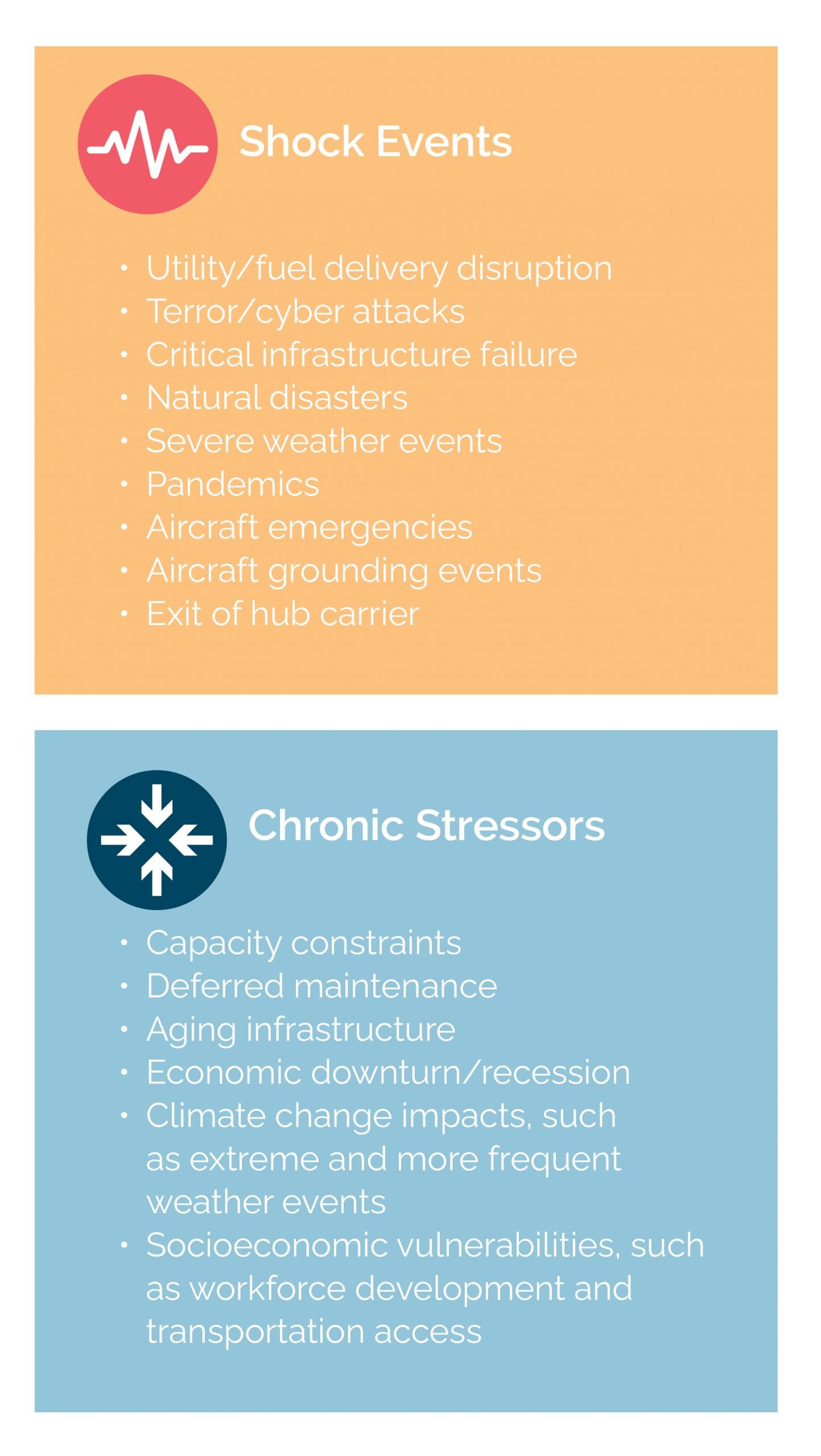 Discussions of resilience often focus on a “shock event” where there is a catastrophic failure of an asset or system that requires an immediate and often very costly allocation of resources (e.g., the power outage at ATL).

Unfortunately, what frequently gets missed or drowned out in these post-event discussions are the seemingly trivial or insignificant events that generally occur prior to the more serious disruption. Shock events rarely occur in isolation—instead, they are often a manifestation of a series of related or cascading smaller “chronic stressors” that occur days, weeks, and even years, before a serious event. Chronic stressors come in all shapes and sizes—they might be unknown issues, or they might be known issues that are being addressed, or, worse, they might be known issues that are being ignored (due to either lack of resources or organizational dysfunction).

A serious discussion on resilience also encompasses the management of risks on a day-to-day basis to address, mitigate, and avoid chronic stressors, that may cumulatively result in a future shock event. Proactively addressing chronic asset- and system-based stressors, for example, by repairing or replacing aging facilities and infrastructure and incorporating critical system redundancies, can prevent stressors from becoming catastrophic failures. Proactively allocating resources up front to avoid or address existing chronic stresses is a risk-based approach that can effectively prevent or at least mitigate both future additional chronic stresses and shock events.

In an airport setting, multiple stakeholders typically share responsibility for the previously described shock events, but the entire community (including the responsible stakeholders) are usually deeply impacted. Each event can potentially be avoided, or at least mitigated, but these events ultimately result from the culmination of chronic stresses that have been inadequately addressed. At virtually every airport, key assets can be several decades old and industry projections continue to show passenger demand that is greater than most airports have ever experienced. Importantly, in an environment where there is only so much funding to go around and there is a focus on new construction, the capital budgeting process typically beats out operational budget considerations. As such, addressing these chronic stressors in a timely and responsible manner is critical to not only each airport, but to the entire NAS.

The resilience paradigm is also shifting away from a one-off mindset to a repeated, more frequent (and severe) pattern of events. This is particularly true for climate change-related events, where 100- and 500-year rain and flood events, for example, used to occur once over that time period, but are now occurring on an annual basis.

Until recently, shock events have been generally thought of as discrete, time-bound events, such as an aircraft accident. If an aircraft accident occurs, there’s a defined start and end to the event, which involves a defined group of stakeholders. While in some cases this still remains true, the current COVID-19 pandemic is an example that has forced airport operators to deal with an unrelenting and continuous shock event. While there was a beginning, the ending is still uncertain, and the impacts of the pandemic have and continue to ripple throughout the entire organization, involving all stakeholders and all lines of airport business.

The resilience paradigm is also shifting away from a one-off mindset to a repeated, more frequent (and severe) pattern of events. This is particularly true for climate-change-related events, where 100- and 500-year rain and flood events, for example, used to occur once over that time period, but are now occurring on an annual basis. The increasing severity and frequency of weather events in particular—such as storm surge, heat waves, and heavier rainfall events—are only now beginning to strain existing airport infrastructure and the available resources (e.g., manpower and funding) necessary to address the impacts.

In the past, airport resilience has focused almost exclusively on critical operating infrastructure. However, the COVID-19 pandemic has helped lay bare important issues related to equity, social justice, community relations, and workforce development. In essence, the “human element” has come to the forefront of how society and business operate. Because airports are often described as “mini-cities” and are significant local and regional partners, they too must consider these issues as critical pieces of airport resilience puzzle. Additionally, the pandemic has forced many airport employees to operate in a work-at-home (WAH) environment, which has placed considerable strain on how airports conduct their daily business. Existing management systems and processes have had to adapt to support WAH-related changes in staffing levels, schedules, and effectiveness in addressing customer needs, while also maintaining a safe, secure, and efficient airport.

Sustainability refers to the long-term ability to continue to engage in a particular activity, process, or use of natural resources that meets the needs of the present without compromising the ability of future generations to meet their own needs. 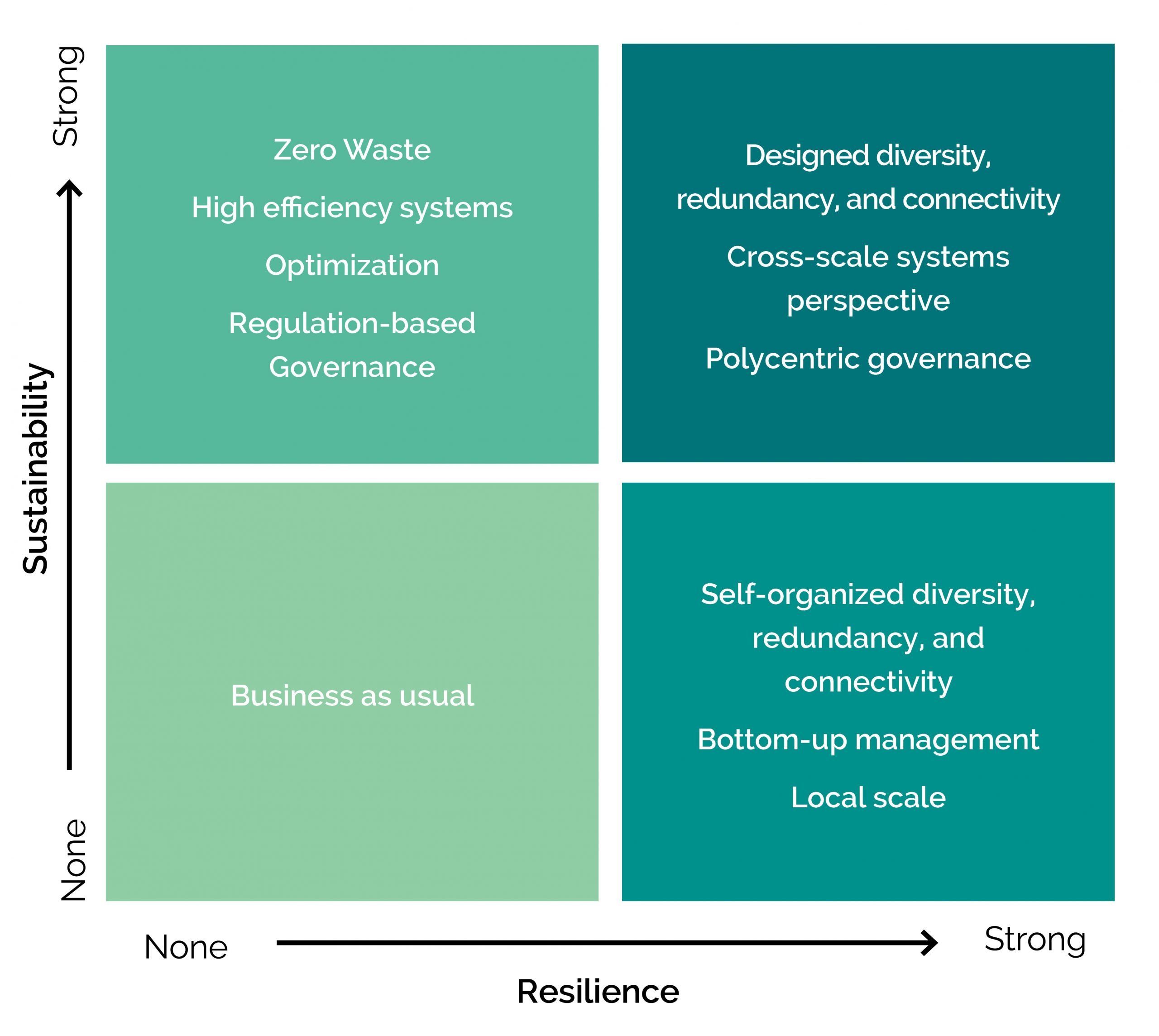 While resilience principles and goals can align with sustainability, resilience focuses primarily on avoiding and surviving adverse and unexpected events (see lower right box in the graphic below), often through diversity and redundancy, whereas sustainability focuses on achieving and maintaining a longer-term positive environmental equilibrium (upper left box), generally through efficiency. However, even though they can be contradictory and the end goals may be different, they can and should co-exist within the same organization (upper right box).

In our next blog on this topic, we will share a template for airport resilience. If you would like to download this article in its entirety, click here to download a PDF. Please reach out to our airports resilience specialist, Neal Wolfe, with any questions or comments regarding this topic. 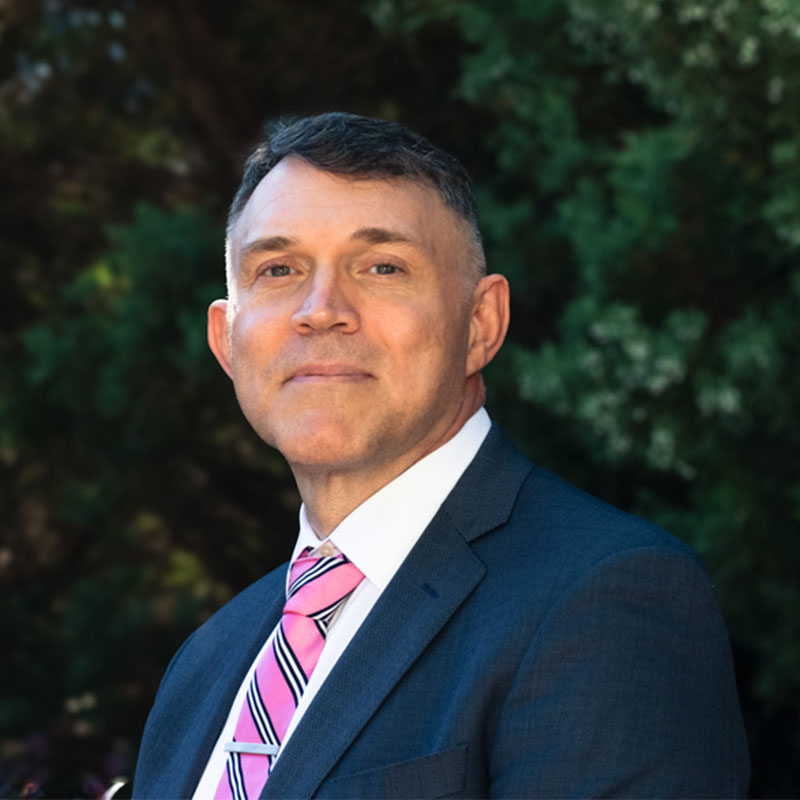 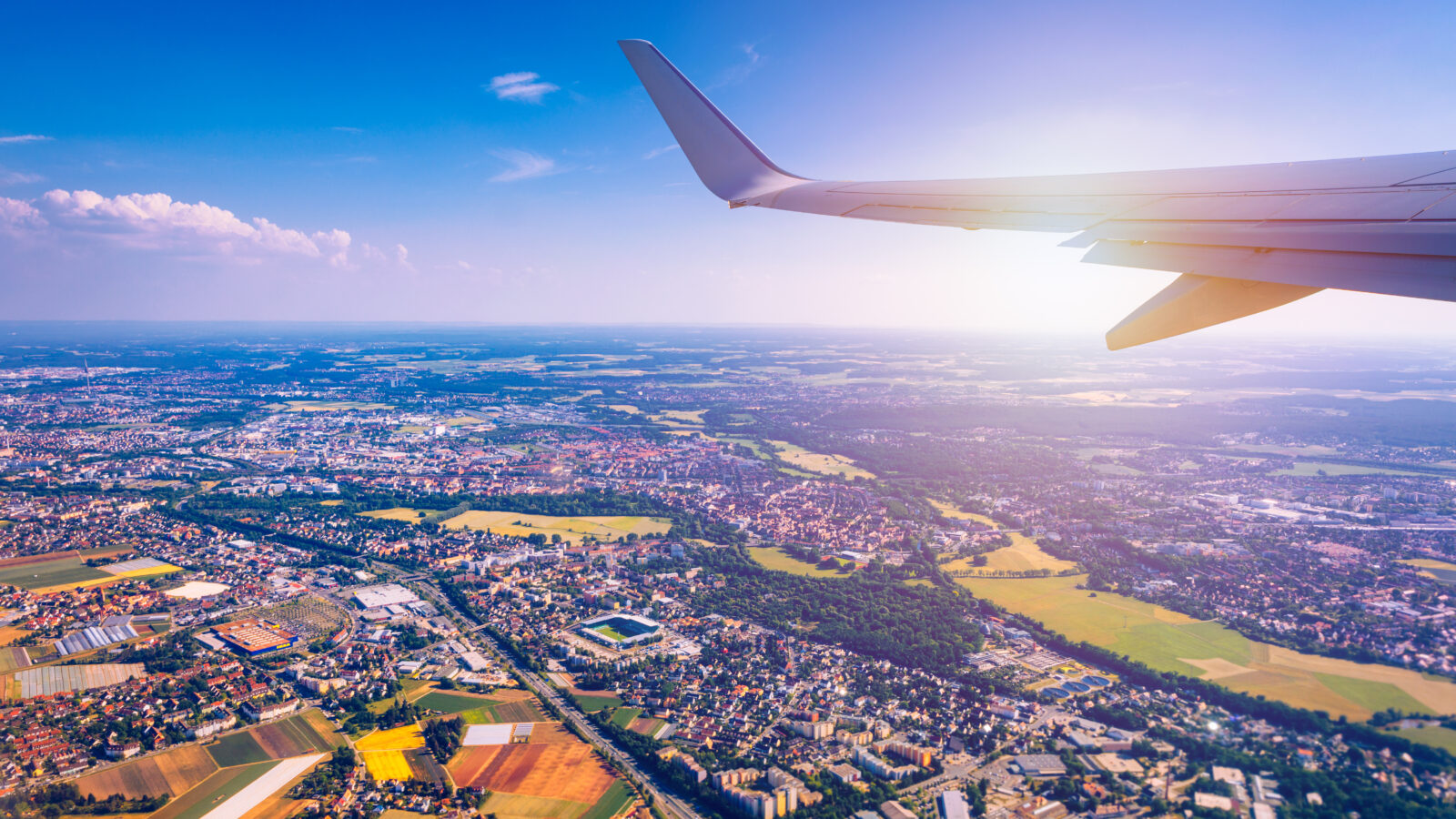 A Template for Airport Resilience