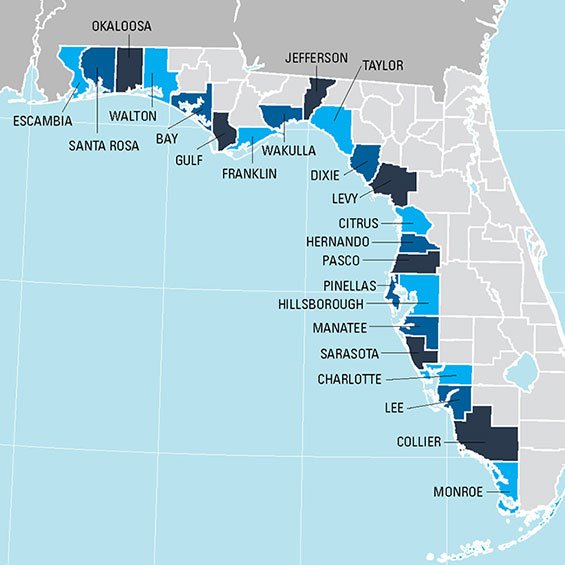 Environmental Science Associates (ESA), a leading environmental science and planning firm, served as the prime consultant to the Gulf Consortium in preparation of Florida’s State Expenditure Plan (SEP) for the state of Florida. Formally approved on October 1, 2018, by the chair of the Gulf Coast Ecosystem Restoration Council (Council), EPA Secretary Andrew Wheeler, development of the SEP was a collaborative process to identify projects and budget allocations from a portion of Florida’s RESTORE Act funding resulting from the Deepwater Horizon oil spill of 2010, the largest marine oil spill in the history of the petroleum industry.

“It has been an honor to work with the Gulf Consortium and staff from its member counties to bring to fruition this critically important plan that will assist the State of Florida in restoring and protecting its environment and economy,” said ESA Vice President and Principal Associate Doug Robison. “We are confident that the projects described in the SEP will substantially improve the quality of life along the Florida Gulf Coast for generations to come.”

A culmination of four years of work and cooperation between federal, state, and local governments and project consultants, the SEP outlines 69 projects and programs that address environmental restoration and enhancement, as well as economic revitalization, along Florida’s Gulf Coast. This balance is critically important as Florida’s economy is inextricably linked to the environmental quality of its coastal zone, with residents and tourists seeking out white sand beaches, clear waters, natural wetland habitats, and thriving living marine resources. The SEP was approved by Florida Governor Rick Scott and transmitted to the Council for formal approval in July of 2018.

The Gulf Consortium is a public entity created in 2012 that consists of one representative from each of Florida’s 23 Gulf Coast counties, and six non-voting governor appointees. The Gulf Consortium is working in partnership with the State of Florida to plan and implement projects that will restore and revitalize Florida’s Gulf Coast in the wake of the Deepwater Horizon oil spill.

The RESTORE Act, which was passed by Congress on June 29, 2012, created the Gulf Coast Ecosystem Restoration Council and established a trust fund to be funded by Clean Water Act civil and administrative penalties paid by responsible parties from the Deepwater Horizon oil spill. This is the first and only legislative program established to collect civil and administrative penalties from oil spill responsible parties and to dedicate those monies to the affected states for environmental restoration and economic revitalization. The Council is composed of the five Gulf State Governors and the heads of six federal agencies.

An interview with Richard Sinkoff, Director of Environmental Programs and Planning, Port of Oakland, on...