Located on the Delta’s western edge in Contra Costa County, just east of Oakley, the Dutch Slough Marsh Restoration is more than a typical wetlands restoration project—it’s a first-of-its-kind experiment that is on track to shape and inform the future of estuarine restoration projects throughout the Delta.

“I feel personally really blessed to work on this because I get to be creative,” said project designer and Senior Engineer Mark Lindley, PE, who drew his restoration designs the old-school way: on paper using a pencil and eraser. Inspired by nature, he recreated sinuous curves and meandering lines to build a new channel network, calling back on the area’s historic tidal channel forms.

“There was a lot of studying what the tidal channels in this area look like,” Lindley explained. “It’s not going to be exactly what was there before, because the whole system had been changed. So, we’re kind of creating a restoration that fits in with the current environment.”

To support the tidal channel design, Lindley and Michelle Orr, PE, Wetlands and Estuaries Director, led the wetlands team to develop Delta-specific channel designs that considered the proper width, depth, and curvature inspired by remnants of historic tidal channels that can still be found in the areas surrounding the site.

For the entire team of ESA designers and scientists restoring Dutch Slough over the past 18 years, this work is rooted in a devotion to this important effort that will form the basis for how other areas in the Delta—and even other estuaries on the West Coast—will be restored. 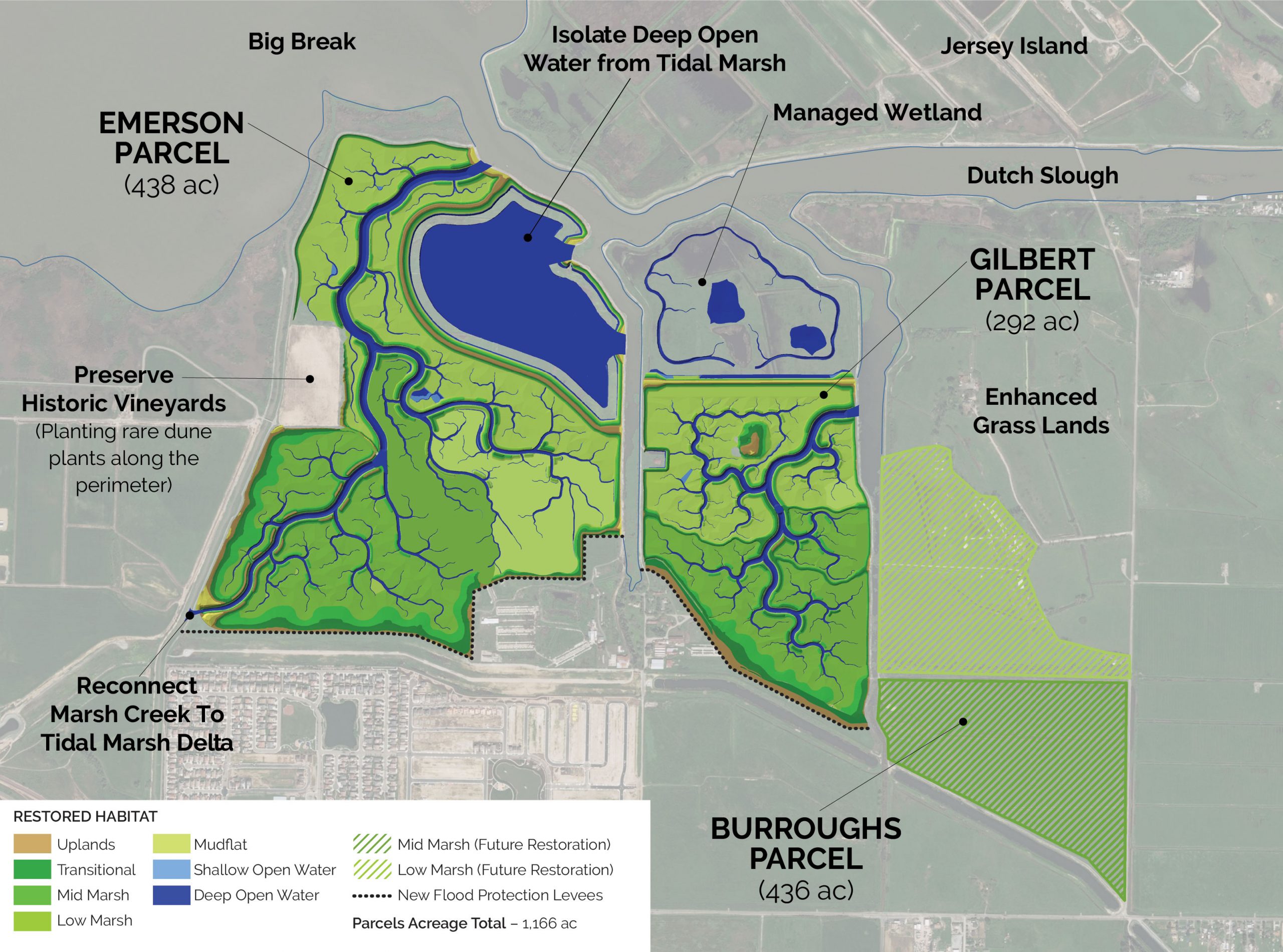 An overview of the site and the team’s restoration design elements, including the network of meandering channels that were originally hand-drawn by Lindley. Click to enlarge.

Throughout the Delta, human activities have altered the topography, isolating historic wetlands from the Delta’s tidal sloughs, leading to diminished habitat and endangering native fish species such as salmon and Delta smelt. In 1999, the California Flood Manager at American Rivers discovered the site and, convinced that the area would be the ideal place to start restoring the Bay Delta watershed for future generations, set the Dutch Slough Restoration process in motion.

Five years later, the California Department of Water Resources purchased the property and together with their partner, the California State Coastal Conservancy, brought ESA on board. The ESA team has been working to help plan and design the restoration of the Slough’s formerly rich marsh habitat to once again provide a healthy system to support native fish and wildlife, including endangered and listed species.
The Dutch Slough restoration site is seated along the edge of the historic Delta and consists of three parcels: the Emerson, Gilbert, and Burroughs parcels. Long ago, the area was a tidal marsh that provided a rich habitat for the fish and wildlife that lived within the estuary. However, in the early 1900s, the site was leveed off from the Slough and “reclaimed” into agricultural land, which was eventually used for cattle grazing, dairy operations, and a vineyard.

This series of aerials shows the execution of the restoration design since construction began on the site in 2014.

A Slough of Adaptive Management

The goals of the restoration are to benefit native species, provide education and recreational opportunities for area residents, and inform future Delta restorations, using an adaptive management framework. While all three of the goals are vital, it is the third goal that sets this project apart to serve as an experiment where lessons learned will inform other restoration projects throughout the estuary.

“What I found really exciting about this project is the site looked like a lot of other sites proposed for restoration in the Delta and the project wanted to use this to learn about restoration,” explains Orr. “This project wanted to test key feasibility issues and answer questions, like ‘How high do you need to raise the marshes to create good fish habitat?’ And ‘How does the size of a restored marsh influence benefits to native fish?’ Answering these questions allows future projects to select the right sites and avoid spending money moving more material than needed.”

And the list goes on. Scientists will be watching this restoration closely in an effort to learn more regarding those questions toward best practices and others moving forward in restoring the Delta.

Getting the marsh height right was a particular challenge for the design team. The Dutch Slough site sits in a unique position along the edge of the Delta, sloping from grades just above natural tidal marsh elevations down to areas that are subsided by as much as 10 to 15 feet, which is too low for marsh vegetation to survive. To restore the site back to a marsh habitat that would support native species, the subsided central and northern parts of the site needed to be raised, and the southern portion needed to be lowered.

The ESA team worked with DWR and a technical advisory committee led by the United States Environmental Protection Agency to develop an approach to test restoration of marsh areas of varying size and elevation, with the goal of better understanding how these parameters influence habitat quality and use by critical native fish and other species.

Building on the restoration grading plans, ESA’s design and landscape architecture team developed construction documents for the Emerson and Gilbert parcels, including:

To generate the amount of fill needed for the restoration—more than two million cubic yards of earth—the team created a deep borrow pit on the Emerson parcel. While the deep open water area will provide habitat for non-native fish like striped bass, it will be served by a separate channel, disconnected from the marsh habitat favored by native fish species.

The soil-moving effort involved a complex channel network that included a new distributary Marsh Creek channel, and a range of tidal channels from very small channels up to relatively large slough channels. The grading effort also created topographic complexity within the marsh restoration areas to support a range of habitats from riparian scrub and forest along the Marsh Creek distributary channel and largest slough channels, to high-marsh along smaller tidal channels deep within the restored marsh areas.

As the Dutch Slough restoration construction nears completion—the levees put in place will be breached in early October—water from the Delta channels will start to flow in and out with the daily tides, and the restored habitat will become populated with native fish and other wildlife. The land will respond and transform, and we will continued to be monitored and studied to create a knowledge base with which to pave the way for future vital restoration projects in the Delta and beyond.

Stay tuned for project updates to come, but if you would like to learn more about this project and the team’s approach, reach out to Michelle Orr or Mark Lindley.

Constructed in 2017, this project is a successful example of a true landscape-scale restoration that...

Grants have long been an important―and sometimes the only ―funding resource for restoration projects. Non-profit...